I’ve developed a late in life love for grasses. Where I once imagined a mixed border cramscaped with a vast array of flowering perennials, this fall I found myself purging and simplifying so I could focus more on texture, form and movement and less on flowers.  In my opinion, grasses are the epitome of all of those things and with every one I’ve added to my garden over the years, I’m inspired to add more! Is it crazy that I’m reinventing my garden after only 4 years?

My front triangle garden sits on an unobstructed incline that gets some serious east wind.  While it can sound quite scary at times, with its full sun location it does make for some pretty magical moments for anything tall and billowy in my garden!

Gardening on a sunny and windy incline!

Here are a just a few of my favorites….

This Andropogon ‘Red October’ (?) has been in my garden from the beginning. I  accidentally purged a group of plant tags so I’m giving its identification a best guess here. As you can see here, it’s suffering a bit from my original cramscaping plan but it should enjoy some extra space come this spring! The Eryngium ‘Jade Frost’ stayed ( I’ve learned the hard way that it’s not a good idea to transplant eryngiums) and the andropogon provides nice support as it reaches its peak height. 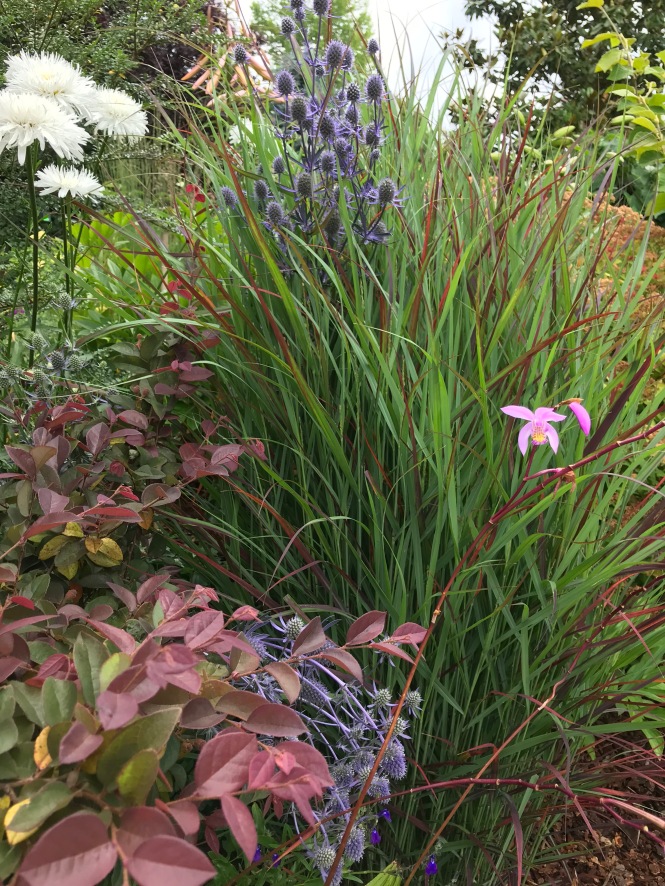 Last year I added several Schizachyrium scoparium ‘The Blues’ to my garden all with varying degrees of success.  The two in my front Triangle garden were the most successful. I’m hard pressed to decide if my favorite feature is their gracefulness, delicate seed heads or colorful transformation throughout the season! 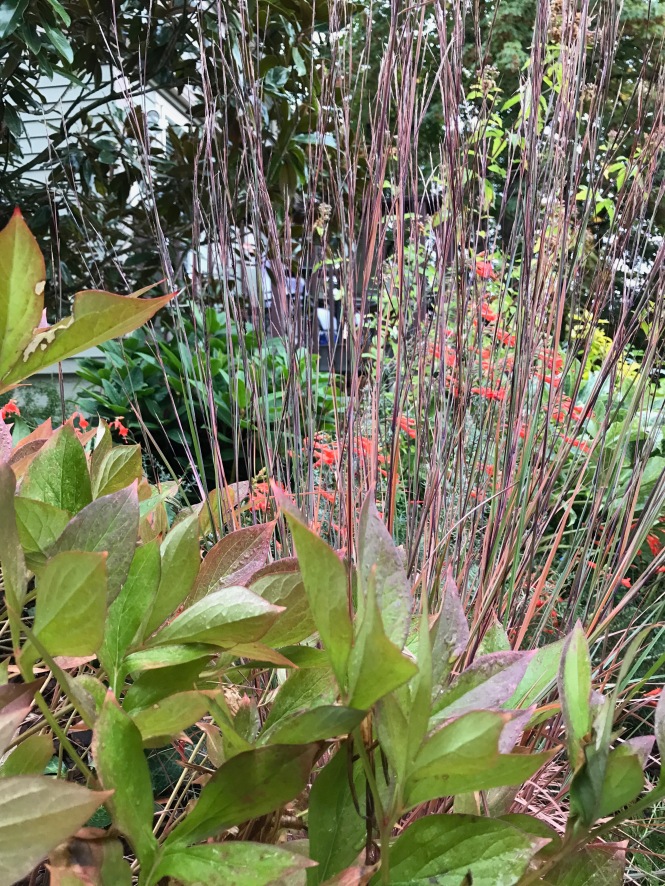 I don’t see many molinias out and about and I can’t figure out why.  If you’re looking for a tidy, tall, sturdy grass that will not get the “flopsies,” this is the grass for you!

My favorite is Molinia caerulea ‘Strahleguelle’. 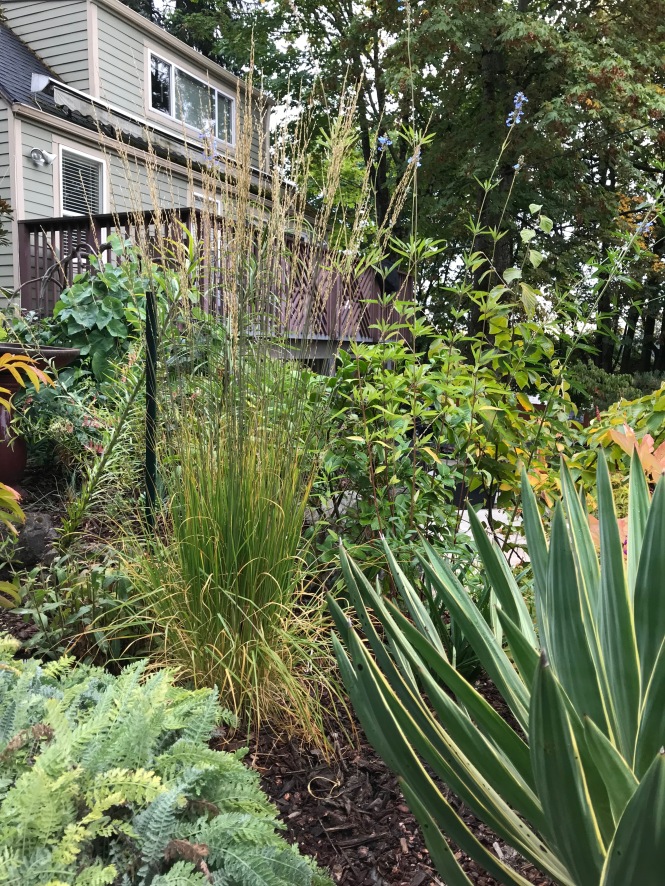 In the background below is Pennisetum macrourum (African Feather Grass). This was a Fall 2018 addition from our blogger’s semi-annual plant swap. With it’s focal placement, I’m hoping it does as well for me as it has for my fellow bloggers! 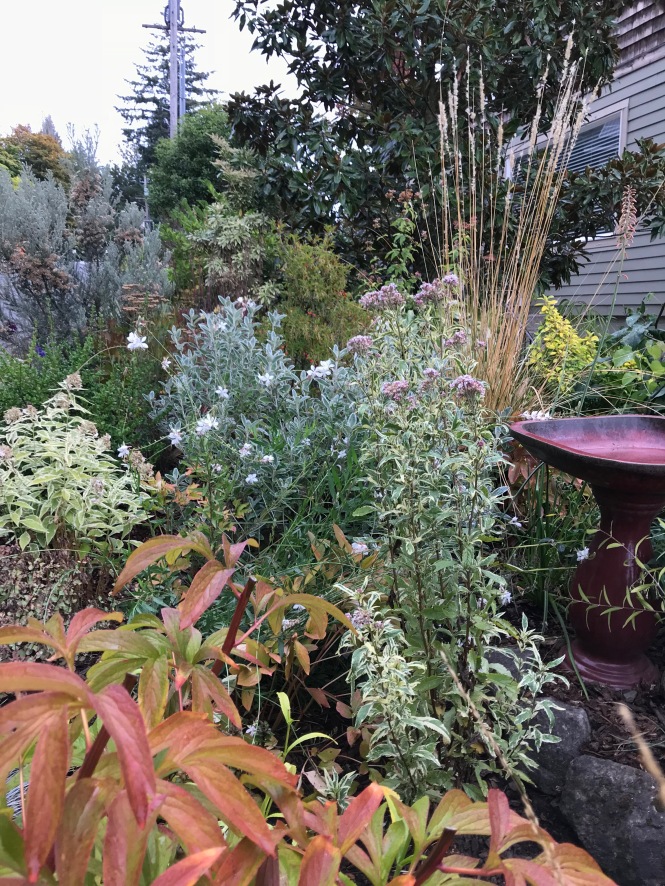 For blue color you cannot beat Agropyron magellanicum. This has been in my garden for years thanks to Xera Plants. 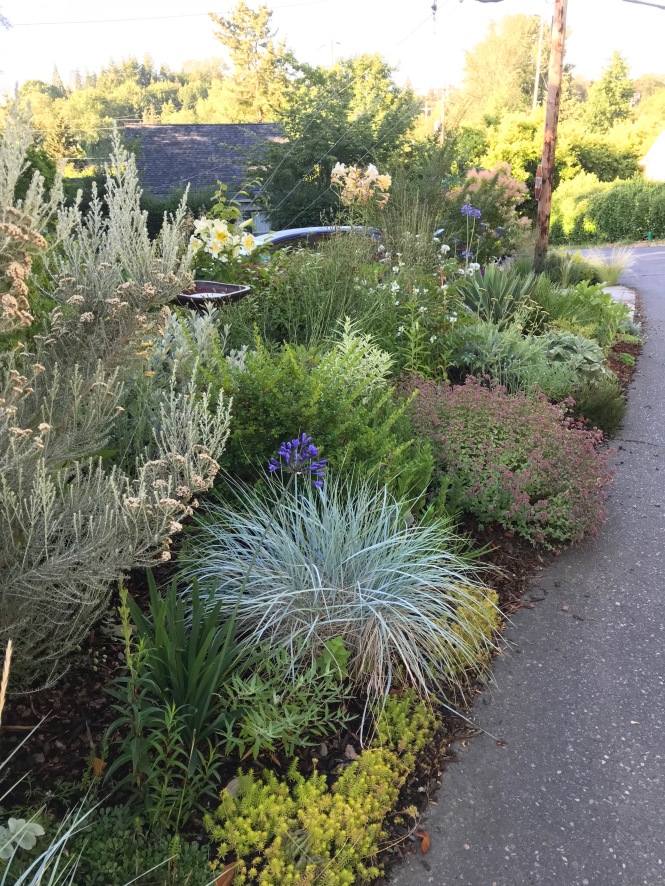 I wish this Penstemon ‘Enor’ would be more prolific! I love the purple against the blue backdrop! 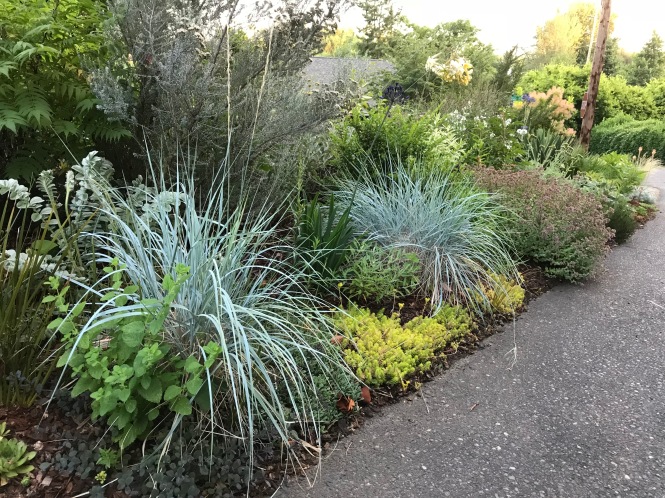 My Agropyron magellanicum does seed around but tends to plant itself among friends so separating can be challenging. I chose to leave this one in the libertia rather than try to move it.

Another senior member of my garden is this Miscanthus ‘Morning Light’. While I had an idea of it’s size, I had no idea that it would become a beast in only one season! This fall I moved it a third time.  Its new home is now in the back of the left garden where it can be a fabulous back drop rather than a blocking screen! I’m hoping it survived the transplant. 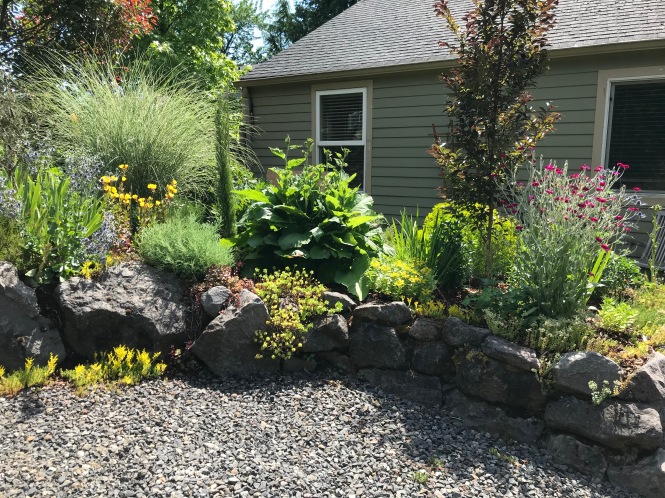 With it’s size, it can’t help but photo bomb almost every picture I take in this part of the garden. I think it makes a nice accompaniment!

Every gardener plants at least one plant that haunts them. In spring of 2015 I planted mine – Stipa tenuissama or Mexican Feather grass. Despite the warnings of Matthew The Lents Farmer , I just HAD to add this to my garden. I’ve been pulling it out of everywhere ever since! Its memory will haunt me forever living amid the spiky fronds of the adjacent windmill palm.

In the fall of 2017, when my grass craze was really getting going, I decided to make more bad choices. With its close downhill proximity, my hell strip was a perfect landing place for reseeding. I thought I would go with the flow and not just keep the seedlings, but transplant one so I could have three! While I loved the result, inevitably they had to go as more offspring quickly started popping up!

Next season the tip of the hell strip with feature more molinias and Anemanthole lessoniana or Pheasant Tail Grass. After espying and coveting Anemanthole lessoniana in a fellow blogger’s garden, I’ve added several throughout the front garden. From its long, slender and wispy “tails” to its four season color interest, there is so much to love about this grass! I particularly enjoy it’s companionship with the caryopteris in early fall. 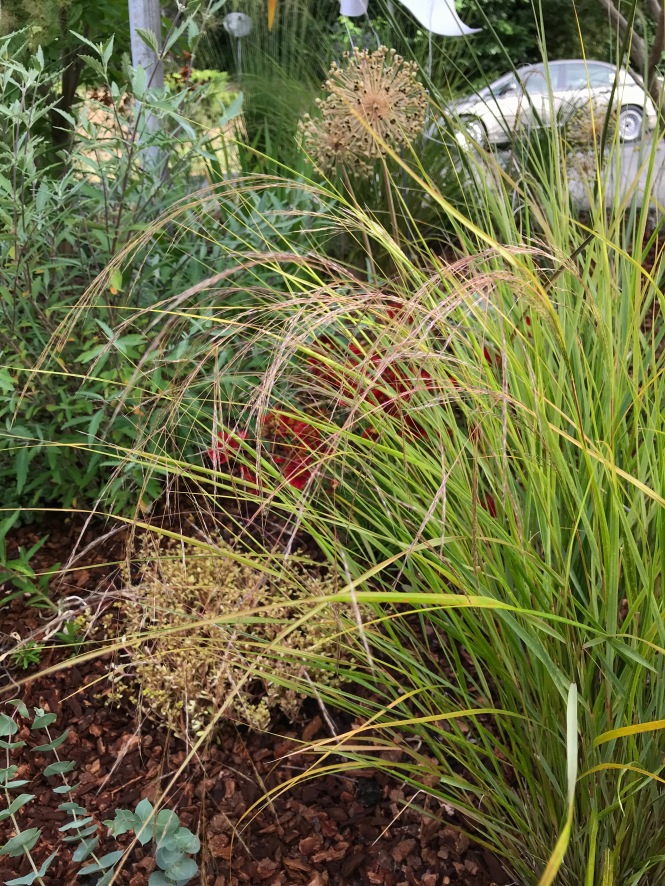 How many Stipa gigantea is too many? I’m hoping three is the magic number because I’m running out of room! ! This grass is the centerpiece of my hell strip and it’s nothing short of majestic. Reaching almost 8 feet tall at times, this grass mesmerizes me with it’s shimmering seed heeds dancing in the sun for much of the year!

Each year I’ve added another to the hell strip. 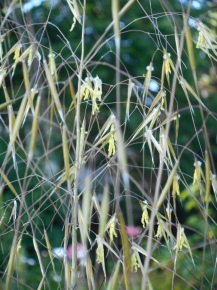 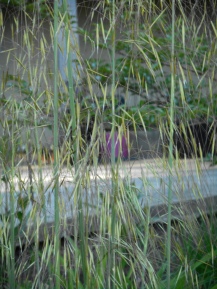 Speaking of fabulous seed heads, just past the Stipa Gigantea are five Stipa barbata. They are victims on my previous cramscaping ideas which doesn’t allow their long, alien finger-like seed heads to enjoy the space they need. This spring they will be relocated up the street where they can get space and the attention they deserve.

You know you and your friends are obsessed gardeners when they show up at the fanciest cocktail bar in town with a giant chunk of grass for you from their garden. My friend and fellow blogger, Heather, Just a girl with a hammer divided this gorgeous Miscanthus malepartus last year and did just that! Now I have a perfect transitioning plant from the hell strip to the shade garden!

I think it makes a beautiful backdrop to some colorful companions!

As I started gardening and learning about plants, I began to worry that people would think I was weird because I would constantly ask them about their plants when I visited their garden. I would file things away in my brain or put notes in my phone so I wouldn’t forget if there was something of particular interest. Well, I’m wondering when Heather is going to realize how many of my grass ideas I’ve stolen from her garden!

Pennisetum spatheolatum was the first of several grass ideas I stole from Heather. You can’t beat it for tall, graceful movement in the garden!

I repositioned two of them last spring and I paid the price with minimal seed heads from both. I’m hoping they will have forgiven me by this summer!

Perhaps the best lesson I’ve learned experimenting with grasses is that they breathe new life into my fading garden in the fall and reinvent the landscape as many of my perennials begin to fade. I’ve developed a new appreciation for the fall color of my peonies! 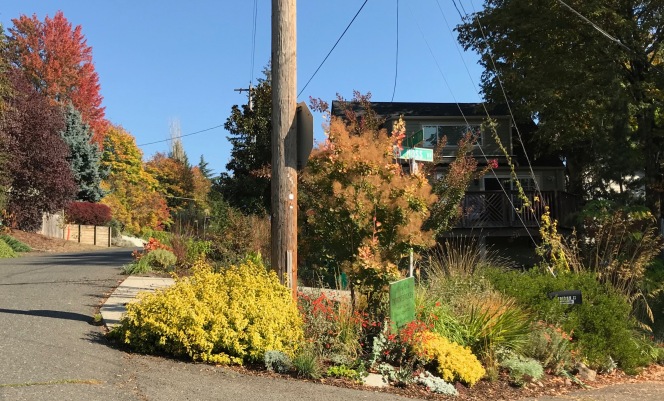 Last fall I edited quite a bit of my garden to more prominently feature grasses and added several alliums, multiple Kniphofia thomsonii var. snowdenii , Asclepius fascicularus and eutrochium to sway among them throughout the season.

As a new season approaches, I’m eager to see how the changes play out and what new and wonderful grasses I’ll discover!