In “Move it or Lose it”, one of my first blog posts, I shared the virtues of embracing change as a key lesson to a beginner gardener. This lesson has served me well over the past five years as I’ve come to understand my garden better and learned more about gardening.

I bought my house five years ago and I’ve said goodbye to plenty of plants that came with the house (ugh, those cotoneasters!). For the most part, the unsightliness, impracticality or death of the plant made removing them an easy decision. There is one plant, let’s call it my Charlie Brown Rhododendron, that I’ve hemmed and hawed about removing for years.

It was time. In retrospect, I think I held onto Charlie out of sheer stubbornness because Matthew The Lents Farmer told me I should get rid of it the same day we took out the bamboo. Also, I am sucker for an underdog so I swore I would save Charlie Brown and resuscitate the poor thing from the brink of death!

Fast forward four years and Charlie Brown recovered well. Perhaps too well because it was getting to a point where I was going to have to chose between trimming the Magnolia ‘Bracken’s Brown Beauty’ or removing Charlie Brown. Sorry Charlie. 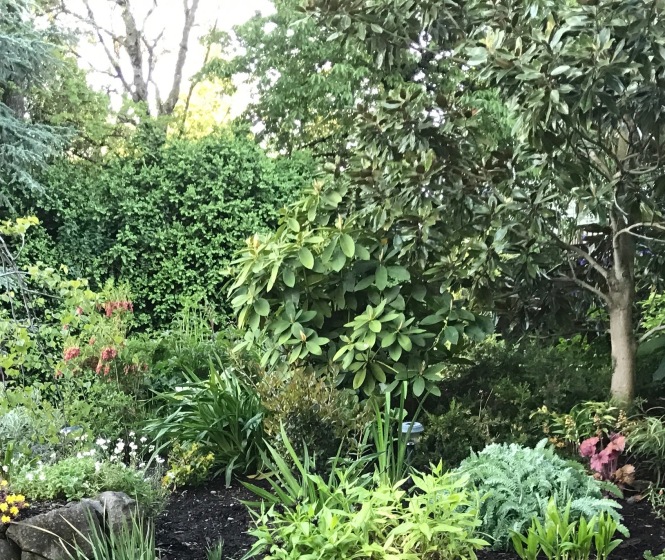 Driveway view. Growing into the magnolia

While I loved the shade Charlie provided the driveway side of the front bed, there are other plants I’ve added over the years that are now more important to me and need more space.

A much better view of the magnolia. The Enkianthus, a favorite, will fill in some of Charlie’s space

It was tough for me as a beginner gardener being comfortable with negative space so I tended to over plant. This is the year I am finding myself editing so the plants I love have the room they need to thrive.

My Grevillea ‘Molonglo’ has become so large it covers Charlie’s stump!

My Grevillea ‘Molonglo’ is one of those plants that has done exceptionally well and I’ve spent three years training it to go around Charlie. With Charlie gone, it can now grow in it’s natural direction and stop smothering all the disporums and heuchuras in it’s path!

I’m enjoying the open feeling and like that I can now see the opposite side of the front garden from my driveway. Everything looks a little weird now with all the perennials still dormant and with many of the evergreen shrubs only a couple years old. Pretty soon it will be an entirely different picture and I can’t wait to see how it looks!