“An amateur gardener figuring it out along the way” reads my blog’s tag line. It seems every new season provides me at least one new major lesson. This spring brought about a personal revelation: the Mardi Gardener has a saucy side!

I feel lucky having a garden that allows expression of multiple facets of my personality. Structurally, the space is set up in five distinct “zones” with each having their own look and feel. Since four of the five zones are either full or part sun, I could have easily created continuity but I’m a “collector” at this stage of my gardening journey and there’s just too much to chose from to narrow my focus!

The front right “triangle” garden is my most challenging. Over the last four years, the “look and feel” I’ve been working towards is “edgy perennial border” meets “cottage garden” that plays off borrowed scenery surrounding the property. Basically, if I was at a nursery and I found a colorful sun perennial, I immediately thought of this part of my garden.

I learn experientially. I can read a tag at a nursery and THINK how a plant will manifest itself but it’s not until I can watch it come to life over a season or two (or three) that I “get it”.

Last year I finally “got” the peony. Now, many of you know the BF or The Lents Farmer. For the BF, peonies are foundational in his garden. In fact, one of our first dates was a trip to Adelman’s Peony Gardens for their opening weekend. Since then, we make our annual pilgrimage where he collects 7 or 8 peonies and I buy 3 or 4. Over the years, I’ve planted the peonies throughout my garden simply where I had room. But, as I’ve begun to define each area’s “personality”, I realized that they all really belong in one place – the triangle garden. 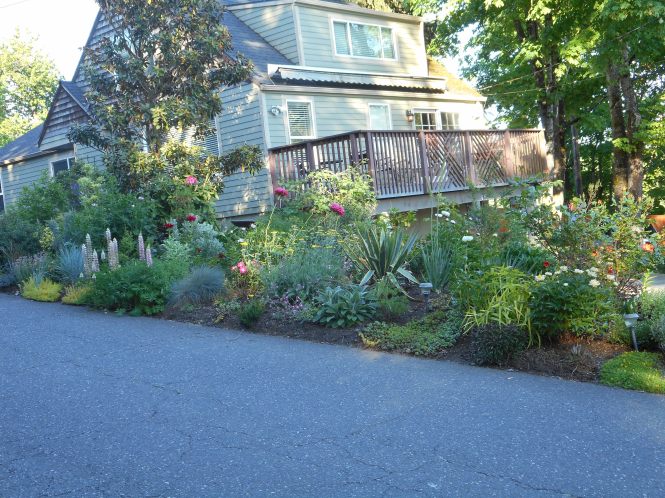 The longest side of the “triangle”. Yes, that is the street. No side walk. Fun times.

The tip of the “triangle”.

Peonies, especially herbaceous, lend themselves perfectly to “cramscaping” which is a revelation I had last year about personal gardening style.  As I was trying to figure out how to achieve that look in the triangle, I realized that the full, beautiful foliage of the peonies would be a perfect solve for some challenging areas.

So, last fall, I relocated several of the herbaceous peonies from other parts of my garden.  I was worried because the digging out wasn’t pretty as I moved my oldest and most established peonies. I am happy to report that everyone survived the transplant despite our treacherous winter. 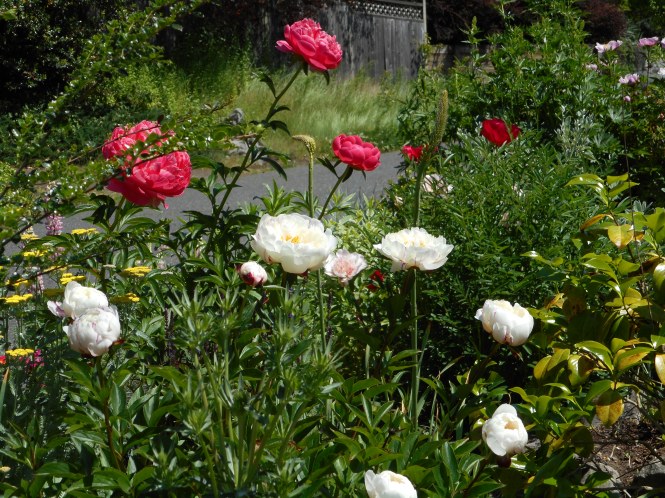 I couldn’t have been more pleased with the results. I still have a lot of work to do (and a lot of empty space to fill) but it feels good to see come to life what I planned versus what happened by luck. And these saucy girls are having a lot of fun together!

The relocated peonies, like this semi-double herbaceous ‘Coral Charm, were interspersed among the existing ones. In it’s first year in full bloom, ‘Coral Charm’ puts on a spectacular display rising above the garden with my first year foxtail lilies. 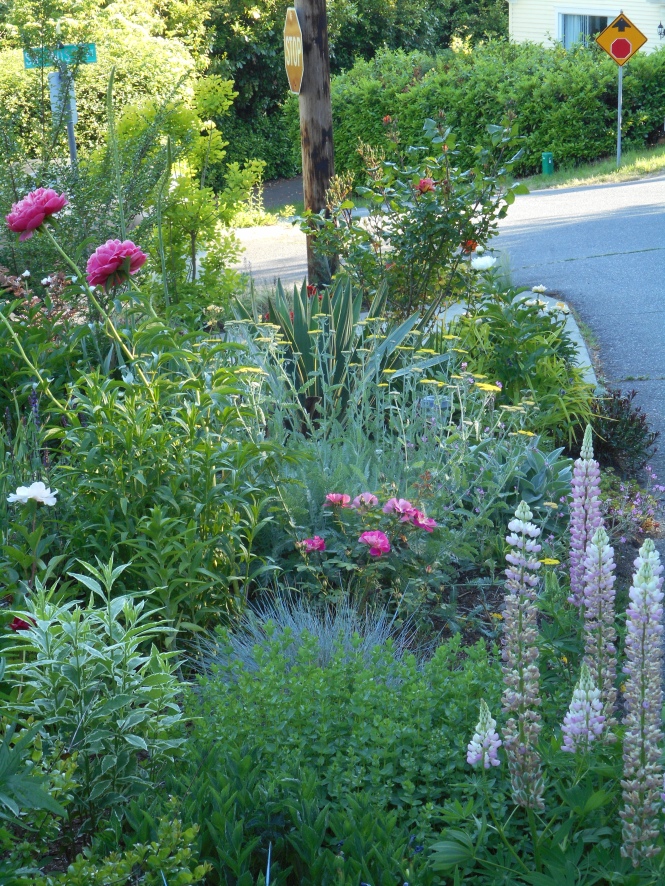 Finally, the color and texture I’ve been trying to attain.

Thank you neighbor across the street for providing a cute “cottage” backdrop. Now, if I could just get rid of this pesky cars, street signs, telephone poles and wires!

Green Lotus was part of the relocation and was not a prolific as in previous years. I expect a full recovery once it gets used to it’s new home. 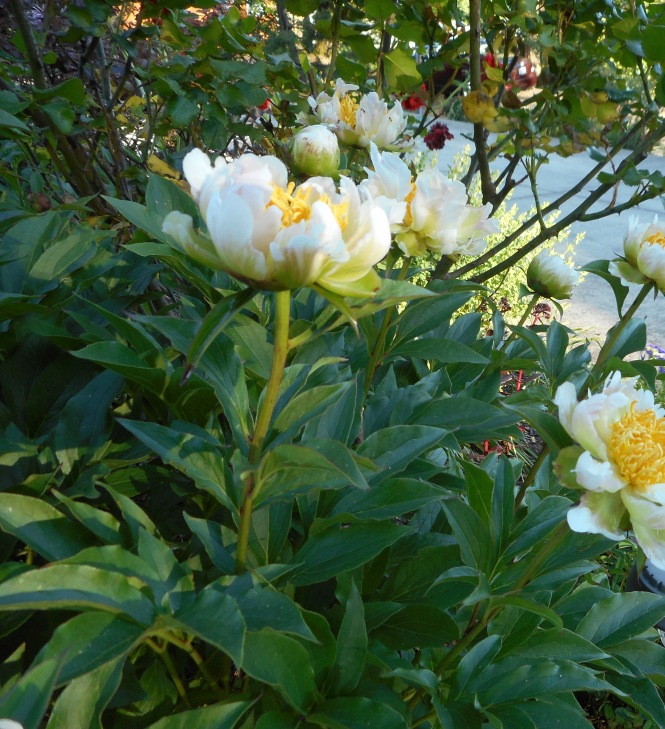 Paeonia ‘Green Lotus’ is weird and almost waxy. Not your grandmother’s peony, for sure.

I feel like a successful cramscaper from his angle

Again, thank you neighbors across the street for the borrowed scenery

After this horrific winter, there was no way I expected my hardy hibiscus ‘Midnight Marvel’ to make it through. ITOH peony ‘Cora Louise’ to the rescue and she is a wonderful long term solution for this space. I have lusted over this particular peony for years. 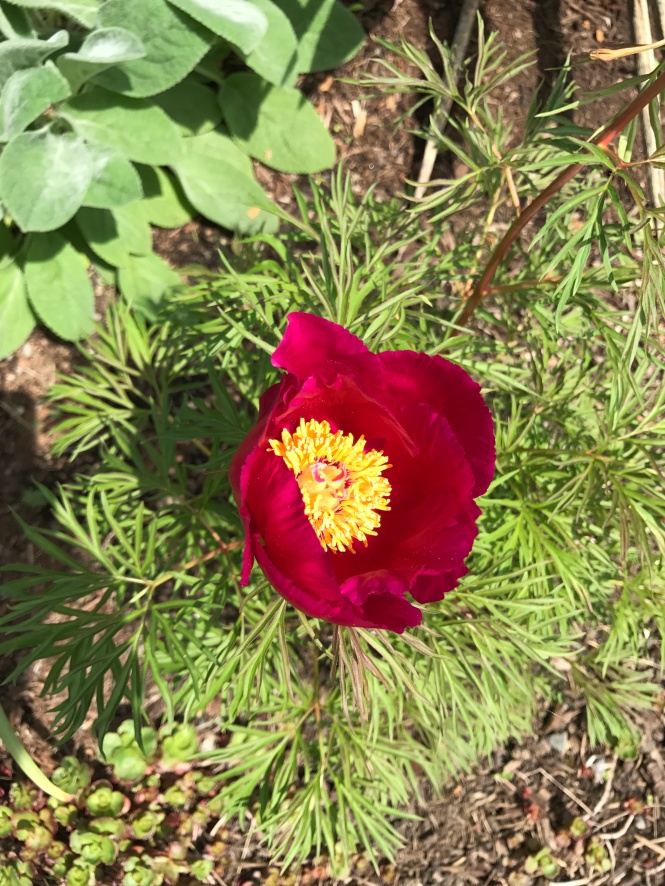 Paeonia ‘Fernleaf Hybrid’. Always my first to bloom and a favorite. This one was relocated to the front of the border once I realized it was getting dwarfed by it’s surroundings.

Paeonia ‘Blaze’ with a stunning backdrop. A senecio, I believe, but I’m not sure which one.

The brilliant red of ‘Blaze’ can be enjoyed from so many sides. I have many points of views like this in my triangle garden due to the variation in height and depth. This is eye level from my driveway. 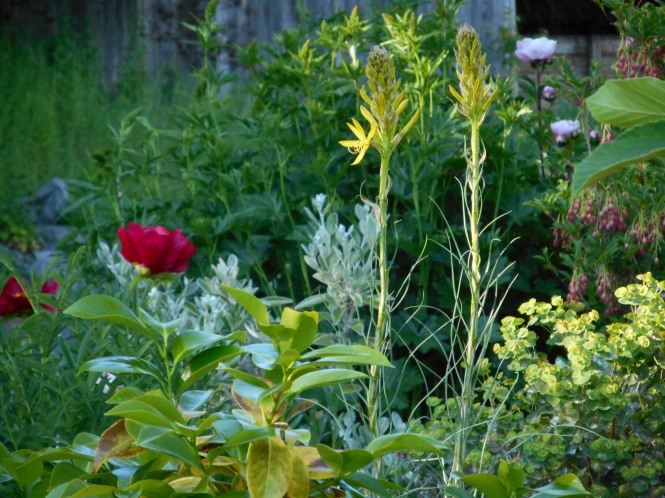 ‘Blaze’ and ‘Martha W’ in the background of these asphodeline lutea

Not all of my peonies were relocated. The ONE peony I really wanted to move is my paeonia ‘Paladin’ because it looks so out of place next to an acanthus. Unfortunately,  it was out of sight out of mind and will need to wait until the fall for it’s new home. 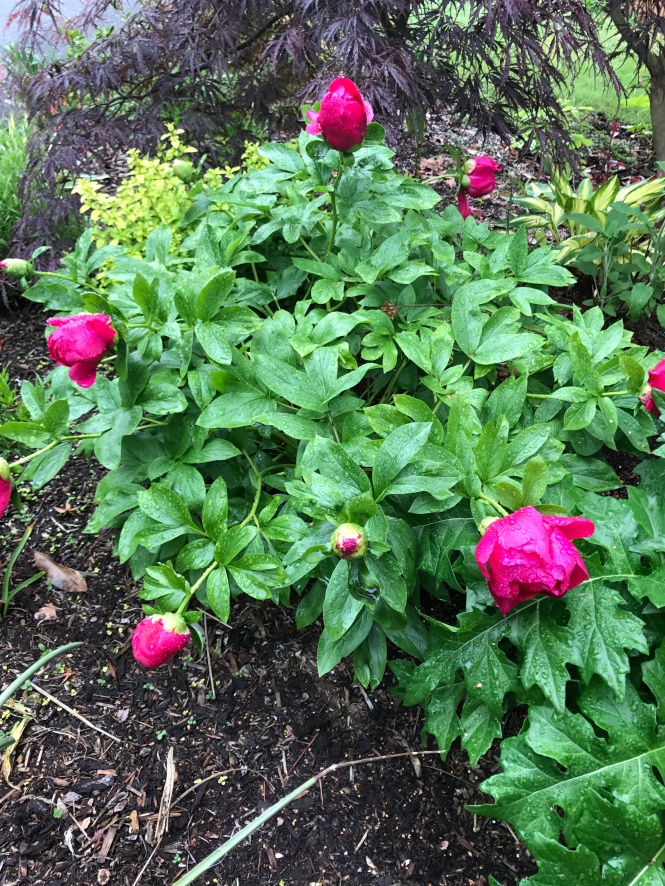 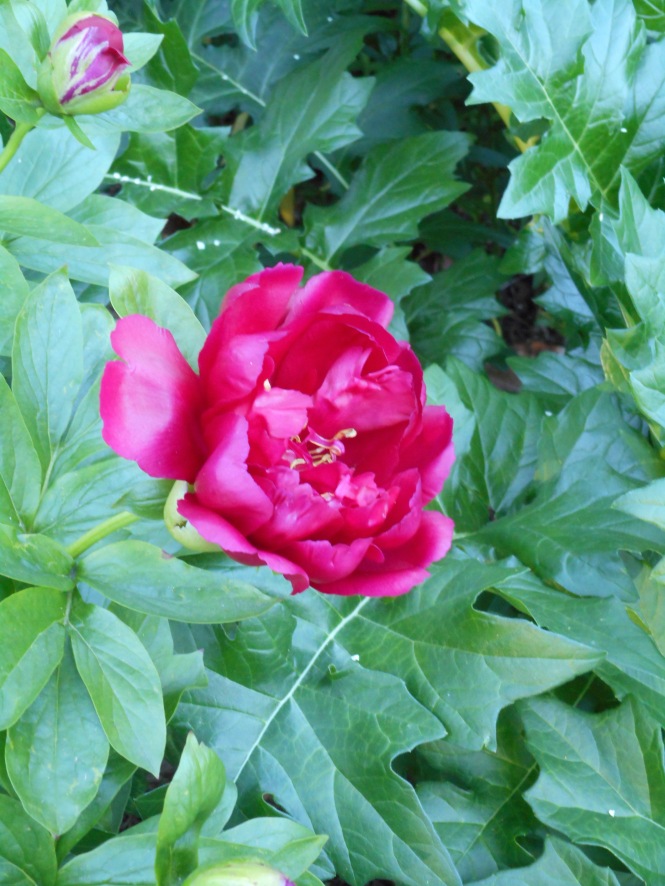 In the same bed is one of my very favorites, ITOH Julie Rose. Again, not quite the aesthetic I’m going for with the callistemon, hesperaloe, archtostaphylus, eryngium vibe I’ve got going on on the left side of the garden.

That being said, it does sit on the west slope of the bed and it sure seems to lend itself nicely to some pretty vignettes with it’s neighbors. The west slope has a bit more of a ‘romantic’ feel with my edgworthia, siberian Iris ‘Velvet Night’ and Penstemon ‘Dark Towers’ so I’m thinking it’s going to stay put and I’ll work on defining or transitioning  the two area better.

My miscanthus ‘Morning Light’ was moved to replace the magnolia lost this winter and makes for a lovely backdrop. Archtostaphylos ‘Howard McMinn’ did not survive a required transplant due to damage sustained by a traffic accident.

A quick trip to the back yard wraps up the peony experience where all peonies were consolidated to one bed last year. Things should get interesting as a pending basement remodel could mean a forced relocation for everyone in order to accommodate an egress window!

Paeonia ‘Mahogany’ I apologize for the blurry pic. Apparently this was my only one.

I love the leaf structure and growing habits of the ITOH’s. 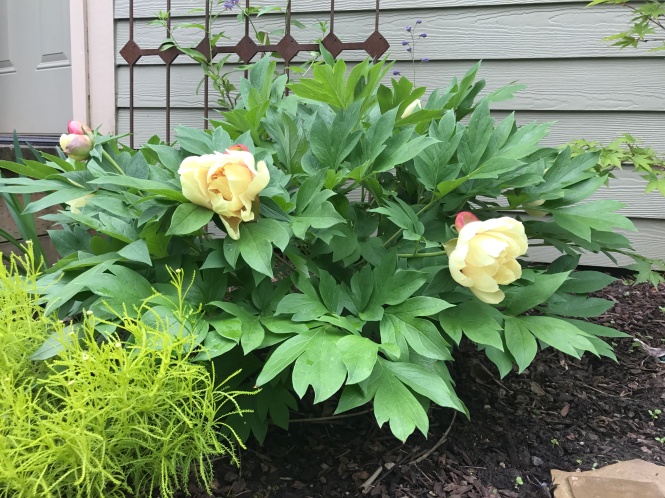 Deciding on a yellow peony was difficult but I’m very happy with my decision.

As I write this, the majority of the peony petals are probably hitting the ground and things are definitely feeling a lot less “saucy” out there.

Now it’s time for “sexy”. Well, it is for me because nothing gets me going like a good callistemon, eryngium, kniphofia, cistus, grevillea or acanthus! ME-YOW!

Bring on the heat because we need it hot in here! 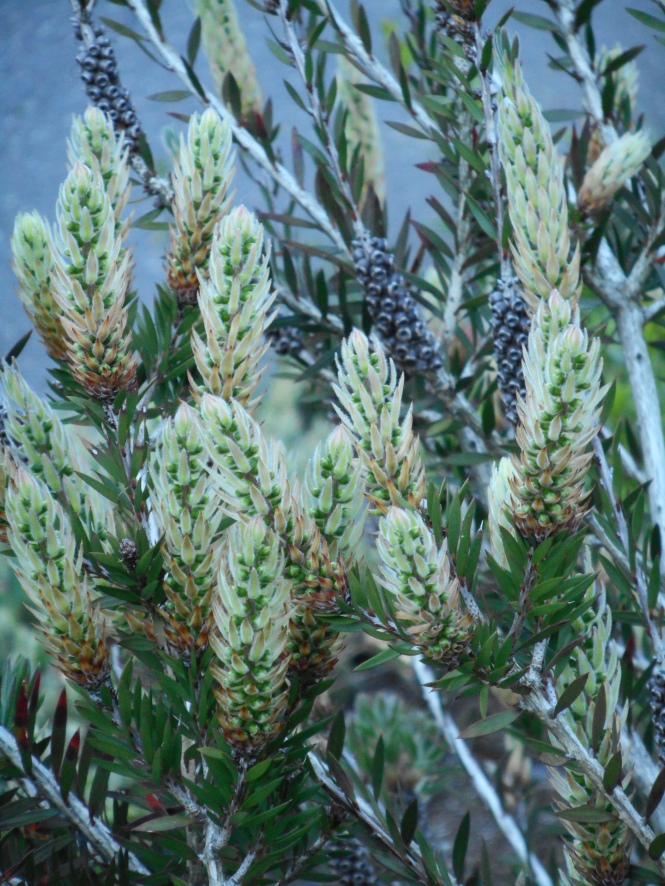 2 thoughts on “The Painted Harlot of Hillsdale”